Shop at Amazon,
All Proceeds from Sales
Support our Club
Follow Us

The pie iron is a great tool for making quick, hot sandwiches and desserts. It’s something the kids can do with a little supervision. Most kids eat a lot on a camping trip and having a set of pie irons will help with that chore while giving them a hot snack. The best thing about cooking with a pie iron is the simplicity for anyone to use which makes it fun for the whole family.

The pie iron can be made of different metals like cast iron, aluminum or stamped sheet metal with long handles and a latch to keep it closed. The best ones are made of cast iron, being heavier and usually of higher quaility creates a better tasting sandwich. The cast iron pie irons are seasoned the same way as any other cast iron cooking utensil. They could last a lifetime with proper care. The more you use them the blacker and better they are, eventually having that nonstick coating that everyone loves.

When the Pie Iron is open, place a slice of buttered bread in one side of the iron with the buttered side facing down or outwards. The filling can be anything you like, but cheese is the best choice if you are new to pie iron cooking. The cheese should be centered within the edges of the bread, then topped off with another slice of buttered bread. Finally, the two sides of the pie iron are clamped together and latched. If the bread is protruding from the iron, it should be trimmed, leaving the edges of the bread crimped together, like a fruit pie. 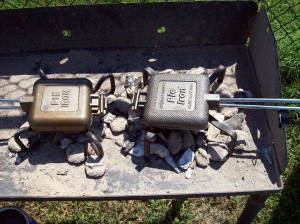 The pie iron is now ready for heating, hold it over a camp fire or prop it up over a bed of coals for cooking. The sandwich will take about 4 to 6 minutes to toast, turning periodically. The pie iron can also be used on a camp stove, home stove, in a fireplace or in the back yard barbecue grill. 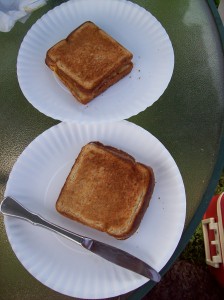 If you’re using buns or english muffins, insert them into the pie iron inside out (back to back) for toasting prior to preparing your recipe, then turn the muffin or bun around, assemble the sandwich and toast it as described above.

The variations of breads or doughs are numerous. Try using biscuits or pizza dough flattened out to make calzones or mini pizza pockets.

The pie irons can be used as two tiny skillets for frying eggs, cooking bacon or sausages.

Butter the muffin as usual. Layer the egg, cheese and meat between muffins halves. Close and latch the pie iron. Trim off excess and cook until golden brown.

Pour the egg into one half of the pie iron, do not over fill. Add a small amount of vegetables and cheese Close the pie iron and cook for about 2 to 3 minutes giving the eggs time to set up before turning.

The fillings will be hot, so be careful when cutting or biting into your favorite creation. The recipes that can be made are endless, experiment and have fun.

This site uses Akismet to reduce spam. Learn how your comment data is processed.

Search SE Camper
Dutch Oven Cooking
Grilling & Barbecue
What’s Cooking?
How do we know when its done?
We use the smell test.
When it smells done, its done.
When it smells burnt, its burnt
and
When you can't smell it,
its not done.